We all know of and love roller skating. This fun and challenging recreational activity involves riding on a pair of roller skates across various terrains. People commonly go to roller rinks or skate parks, but it can be done on just about any flat surface outside. With the recent pandemic, we have seen a huge resurgence in the popularity of the sport. More people are trying out this sport than ever before. But did you know that there are different types of roller skating as well? Some styles of roller skating emphasize speed, while others are more for performance. Continue reading to find out more about the world of roller skating!

Roller skating, also referred to as quad skating, involves skating with the classic two wheels in the front and two in the back. While this is not the easiest sport, it has risen in popularity because of its low barrier of entry. Anyone at any age can roller skate and still have fun even with the inevitable fall or two. It can also be done in most climates. There is a wide range of styles, activities, and competitions fit for any roller skater. In contrast, inline skating features skates with four wheels in a row.

You might have noticed that the terms “inline skating” and “rollerblading” are thrown around a lot to refer to the same sport. However, there is a historical reason why these two terms exist. In the 1960s, Scott Olson and his brother modified an early version of the inline skate and sold it under their line of Rollerblade skates. They were instrumental to the rise in popularity of this type of skating, which is why many of us call it “rollerblading” today. Those who use Rollerblade skates are technically “rollerblading”, but the correct terms are “inline roller skating” or “inline skating” if one is not using those types of skates.

What are the different types of roller skates?

These skates are also known as indoor skates, recreational skates, and traditional skates. Artistic skates are most similar to ice skates but with wheels instead of blades. There is a high leather boot, toe stop, and strong sole that provide support and stability for jumps and spins. The wheels are also a bit narrower for more control in turning and movement.

Unlike the artistic skates, jam skates have a low-cut design and don’t have a toe stop to allow for more flexible movement. Without these extra details, this makes for more lightweight skates ideal for quick movements associated with jam skating.

Speed skates can be in both quad or inline form, although most people associate the term with inline skating. Quad speed skates, in particular, look more like shoes. They have little padding and cut off just below the ankle. This design is optimal for quick turns and a wide range of motion. As you can imagine, speed skating can involve long-distance racing. The skates often include lightweight plates so as to not weigh down skaters over long distances. Some jam skaters prefer to use speed skates because of the similar design to jam skates and freedom of movement.

Derby skates are similar to speed and jam skates because of their low-cut design but are unique in that they have laces, a Velcro strap, and more padding. These features keep your foot in place, which is especially important in roller derby, a high-contact form of roller skating. Durability and speed are the most important factors for these types of skates.

Rhythm skates look more like artistic skates in boot design but have a wider range of movement like the jam skates. Therefore, there is more ankle support and the ability to maneuver with a lot of flexibility.

Which type of roller skating should I try?

As mentioned in the previous section, there are different types of skates for various styles of roller skating. The best way to know whether you will like a particular form of roller skating is if you try out as many as you can. You never know which one will click with you! Let’s go into more detail about each one:

This is your normal everyday skater that you see at the rink, park, or sidewalk. Almost everyone starts here before transitioning into other types of roller skating. Most of the general population of skaters are in this category because it is easy to teach yourself and is a great form of exercise.

Artistic skating is a form of figure skating that involves precisely choreographed steps. It initially took inspiration from ice skaters, and much of it is still very similar to ice skating. Skaters are required to keep good posture and form in movement, jumps, and spins. There are also competitions for individuals, couples, dance, and synchronized groups. Traditionally, quad skates are used, but some skaters opt for inline skates as well. You might be more inclined toward artistic skating if you are an ice skater since many of your skills are transferrable to it.

Many people describe jam skating as breakdancing on skates. Jam skating is great for people who love dancing but want the extra challenge of mixing in gymnastics and skating. It initially originated from traditional roller disco. Over the years, it has evolved and been highly influenced by other art forms like breakdancing, artistic skating, gymnastics, and modern dance.  Competitions often involve competing against other skaters, just like in a dance battle.

As you might have guessed, speed skating revolves around speed and racing. While it appears that way superficially, there is a lot involved in this sport. Skaters are not just trying to outrace each other but are also challenged to maneuver and strategize quickly on their way to the finish line. Both quad and inline skates can be used for speed skating.

While this might sound intimidating at first glance, it is actually just the skating equivalent of skateboarding and BMX. If you are an adrenaline junkie, then this is the sport for you. Your transition would be made easier if you are coming from a discipline like skateboarding. However, the most important factor to consider is your safety. Make sure to wear protective gear when attempting dangerous tricks.

Show your tougher side by trying out roller derby! This type of roller skating calls for two opposing teams that have to push each other (literally) to win. During a typical game, a “jammer” and “blockers” from each team skate counter-clockwise around a track. For every opposing member they lap, the jammer scores a point for their own team. Blockers prevent the opposing jammers from getting past them while helping their own jammers get through. It is a high-contact sport that requires you to be more aggressive. So, if that sounds like something you would like, then we recommend you go for it.

Roller hockey is also a high-contact sport, just like roller derby. The main difference is that the skaters are playing hockey on wheels. This is another great way to get into roller skating if you like to get down and dirty along with your team members.

What kind of roller skates are easier?

There is not a straight answer to this as there are different factors to consider. But in general, roller skating is easier for beginners, especially for young children. Roller skates provide stability and balance that most people lack at the beginning. Older children and adults may fare better in inline skates because they are easier to move around in and can go faster than roller skates. Stopping is another crucial point you might want to think about.

On inline skates, it can be more difficult to stop if your skates don’t come with brakes. You will need to practice the T-stop, which is when you drag one foot behind the other in a T-shape fashion. This can be more challenging for beginner skaters. Roller skates have toe stops that you can use to stop pretty quickly. Either way, there is a learning curve for both skates. In the end, it depends on what your preferences are and what kind of trade-offs you are willing to make. Roller skates and inline skates are both fantastic choices to start off with. You can always switch to one or the other down the line if you desire to do so.

How long will it take to learn inline skating or roller skating?

Just as we discussed above, there are pros and cons to starting with inline or roller skating, and it also highly depends on what kind of background you have. A figure skater may adapt much quicker to inline skates than an absolute beginner would. Because of this variability, you should expect to start picking up on inline or roller skating after a few hours, if not more. The following is a general guideline on milestones you should expect to achieve at the beginning of your skating journey:

For most (if not all) people, the feeling of skates on their feet is foreign and unnatural. As humans, we are used to standing still on our own two feet. We lose a bit of this control when wearing skates, so in the beginning it is our job to fight against this feeling. Surprisingly, it is not that hard to do after one or two rides. Wearing protective gear should help you feel more secure if you do fall in case that is also a concern.

Besides the actual act of skating, the other skill you need in your toolbox is the ability to stop. This is not only for your safety but also for the protection of others around you. Out of any other tricks you learn, this will be the one you use the most in your future skates. If possible, start learning it on your first day of skating.

After a few skates, you will most likely have gotten the hang of it. You should start to pick up speed by pushing off your skates a little harder. As you gain speed, make sure to control your balance or learn how to. This will lay the foundation for the rest of your skating career.

Remember that you are on your own timeline. What may be easy for others may not be for you, and that is okay! Be patient with yourself because learning inline or roller skating is a marathon, not a sprint. Don’t expect results overnight, but don’t slack off on practicing if you want to get better.

The great thing about roller skating is that it is so versatile compared to other sports. There is no one set way to do it, so anyone can get involved in it in one form or another. It can also be done anywhere with good weather and a flat surface. Its popularity has endured for years and will continue to do so for a long time. We hope that you enjoy your time roller skating and wish you the best of luck. Happy skating! 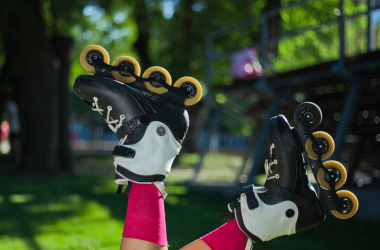 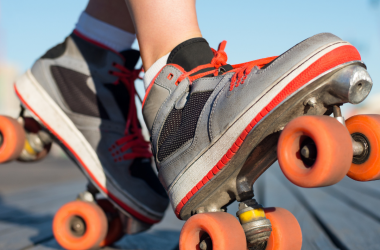 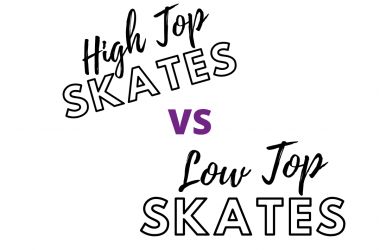 In this post, I am going to compare high top and low top skates.  You will have noticed…
Read More 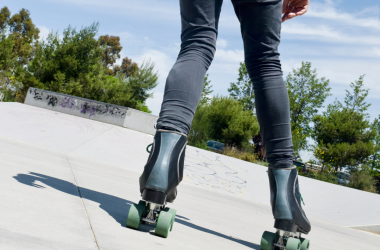 Perfect How to Roller Skate Backwards

Have you ever tried roller skating backwards? It’s quite scary. Well, that’s the thrill of skating. But if…
Read More 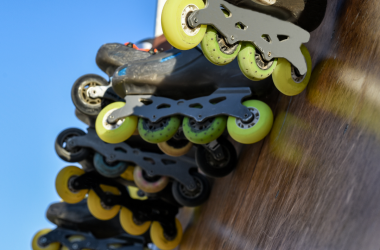 The question I hear time and time again is what are the best inline skates brands. For quads,…
Read More