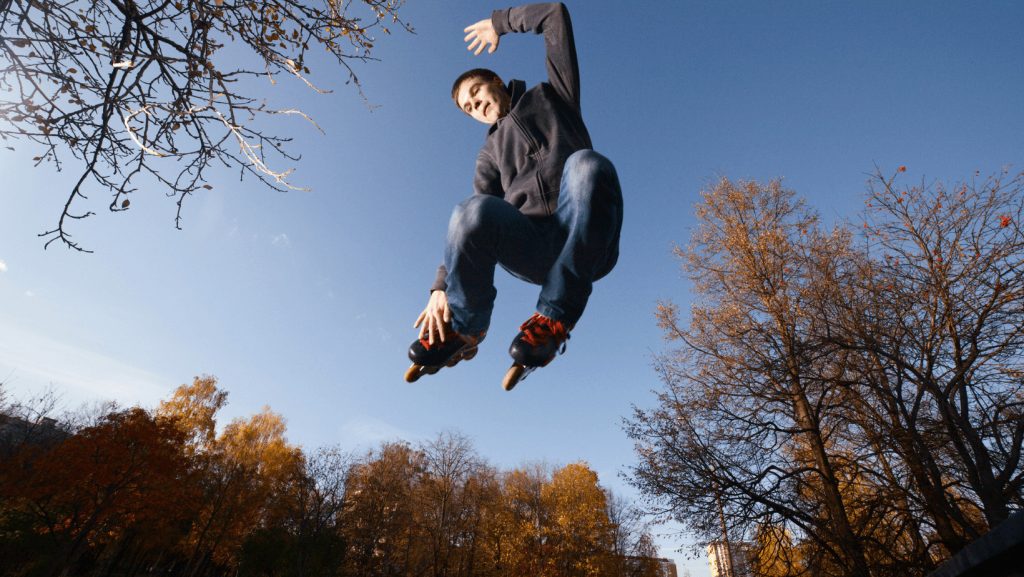 Jumping on roller skates is an inevitable skill you’ll have to learn on your roller skating journey.

If you plan on looking cool while roller skating, just learning the basics of this technique will drop the jaws of more than half of the kids at your local skate park.

This step-by-step guide is built especially for beginners to help them become pros in the fastest way possible.

Learning to skate is all about the strategic movements, and succeeding at it is thanks to fancy words like stability, momentum, speed etc.

So, while keeping the laws of physics in mind, I will teach you how to jump in the most efficient way possible, which most coaches and trainers fail to do nowadays.

The 3 Kinds of Jumps on Roller Skates

Where’s the fun if there are no variations in the types of jumps you’re learning, right?

That’s why, in this guide, I’ll be teaching you 3 kinds of jumps:

If you’re ready for your epic transformation from a boring skater who just knows how to skate in a straight line, to an awesome pro, then this is the place you need to be.

This won’t be easy, so buckle up your skates and get practicing.

Everything starts with the basics. The basics might be simple but they aren’t easy for beginners.

The minimum required to learn the basic jump on roller skates is at least to be proficient in skating comfortably in a straight line.

This step-by-step guide focuses on teaching you different kinds of jumps in the fastest and efficient way possible.

Afterall, you want to become a pro quickly, right?

The 4 Steps to do the Basic Jump

We have divided the process of jumping into 4 fundamental parts to make things easier: 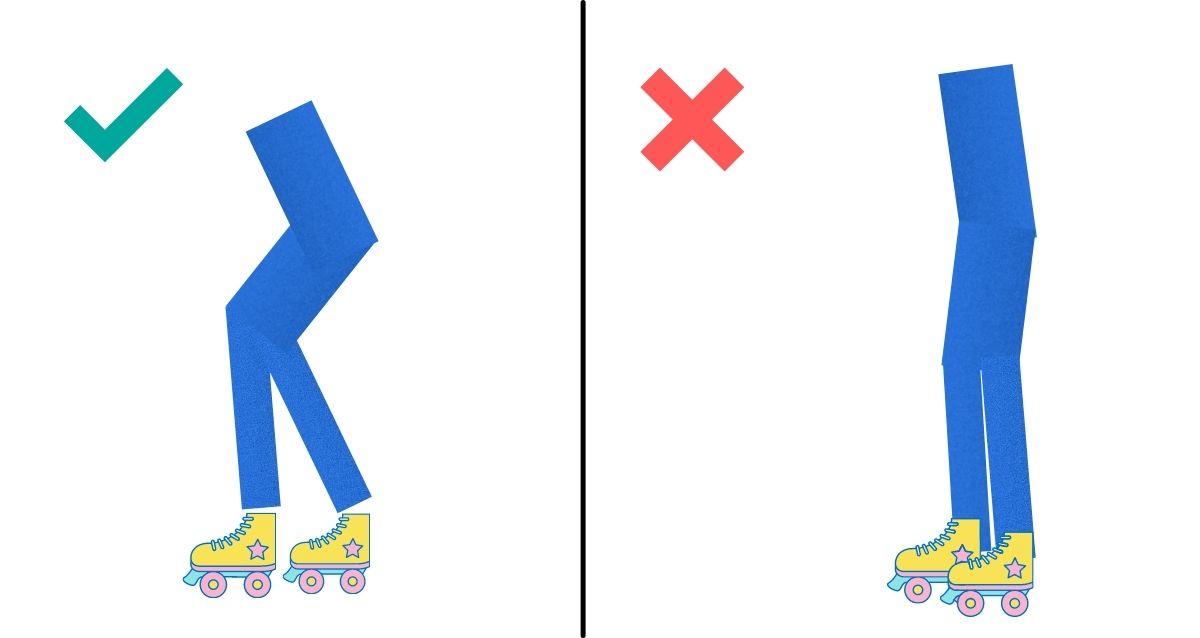 Staggering the feet means keeping your feet in a scissors position; one foot a bit forwards and the other a bit backwards.

Not staggering the feet is the stupidest mistake you could think of while jumping as a beginner.

Almost every kind of jump or skating trick requires this step. So practice being comfortable at staggering your feet. It won’t only help you jump but also become a well balanced skater. 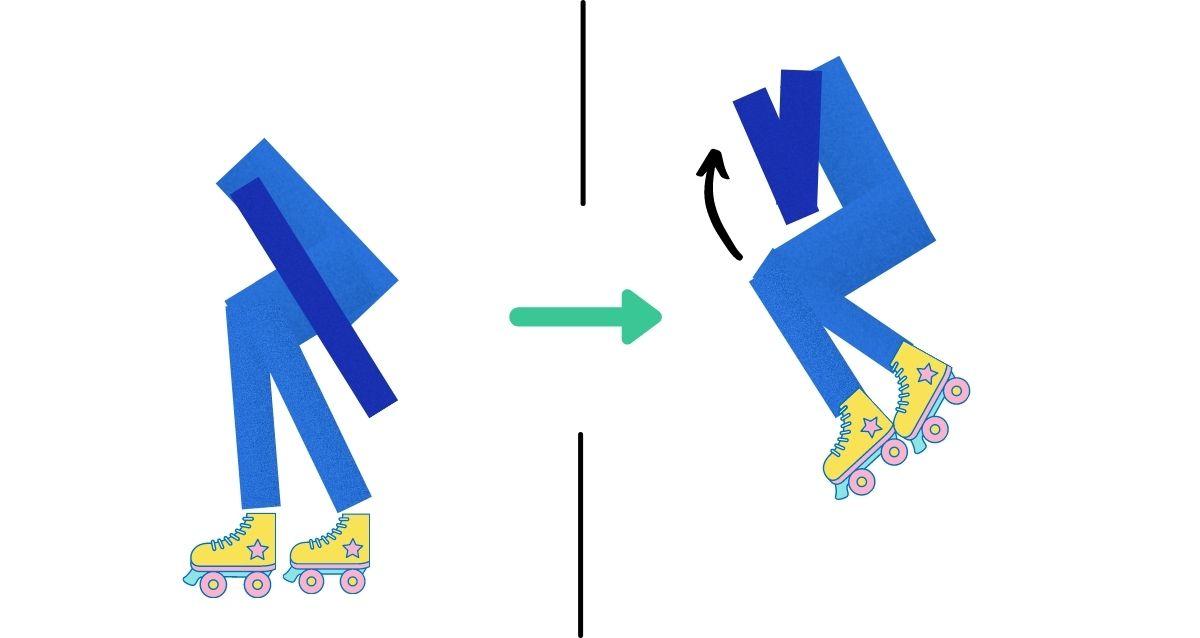 Launching yourself correctly and safely can be a bit tricky for beginners.

Here’s a complete breakdown that will help you launch yourself like a pro. 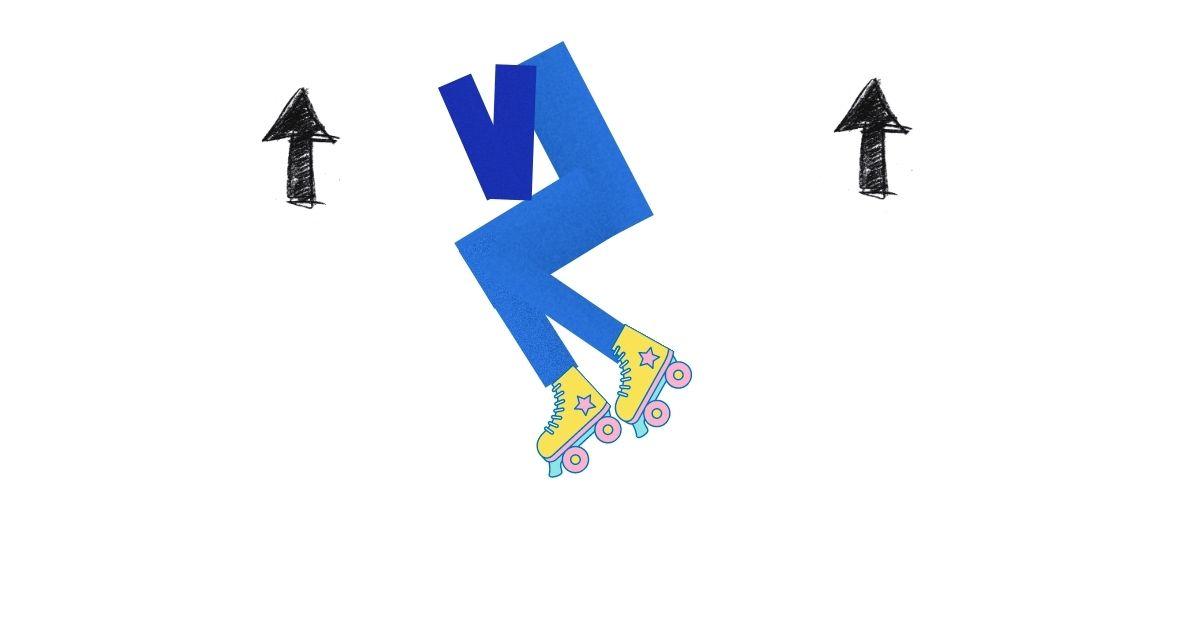 Being in the air can be the scariest part of jumping on roller skates, but it also only lasts for a split second.

Here’s what not to do when being in the air:

You won’t probably make any mistakes while being in the air, because the human body is already accustomed to jumping on the ground.

The jump is the most enjoyable part of roller skating. The feeling of flying through the air is something you won’t get bored by quickly. 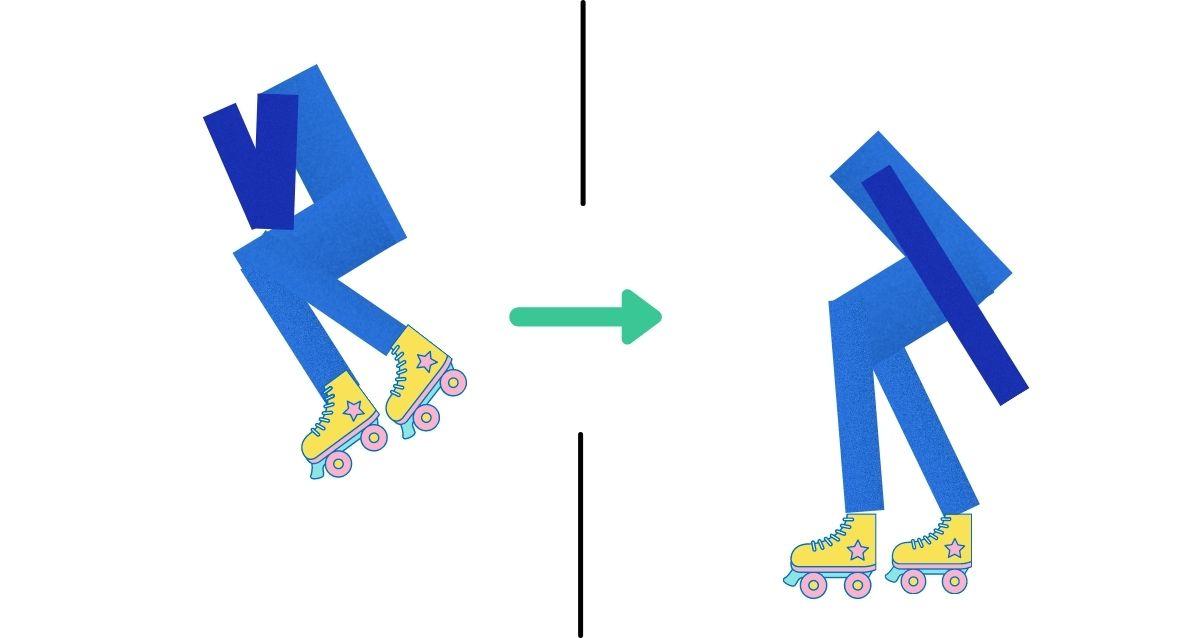 I know you shouldn’t be too self conscious when learning to skate, but jumping and then falling into the ground face first really does make you look awkward. Moreover, it’s also unsafe.

That’s why you have to learn to land safely.

That’s all there is to it.

You must take it slow while learning to jump. This is to avoid any serious injury. Make sure to follow the following rules:

Here are some on skate and off skate drills to make jumping ten times easier:

How to Jump Higher, Jump over Cones

Now that you’ve got the basic technique down, you’ll have to learn how to jump higher on roller skates.

You’ll need something to jump over:

How to Jump Farther

Now, if you want to do an A-tier jump on roller skates, you’ll have to jump farther.

The more the velocity in the forward direction, the more the momentum and hence more distance covered. That’s basic physics.

People make the stupidest mistakes when learning to jump on roller skates.

Here’s how you can spare yourself from a few scratches while learning. 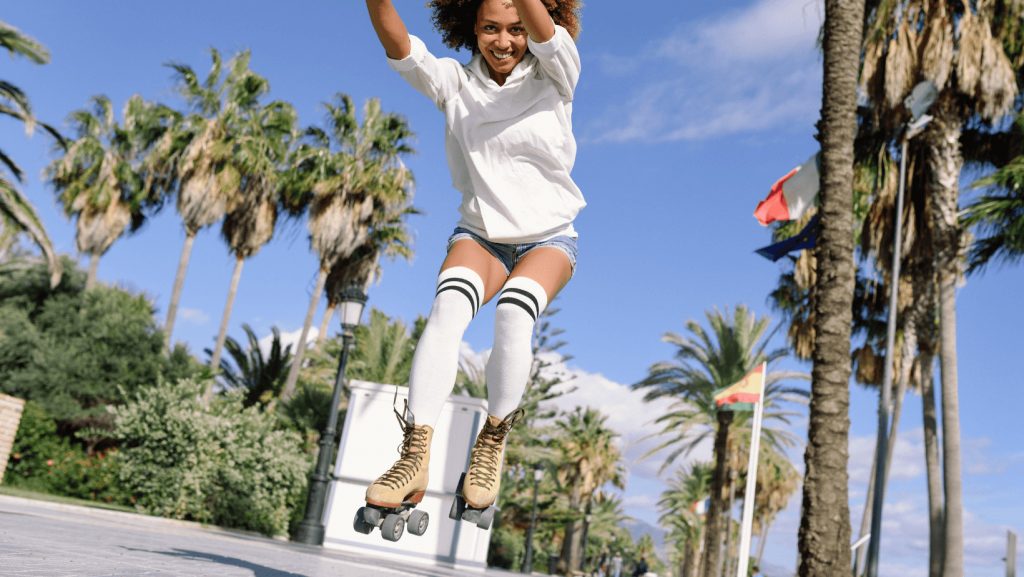 After you can do the basic jump nicely and comfortably, it’s time to move on to the next level.

The minimum required is to be able to skate backwards.

180 degree jump is the technique that every skater must know. The reason is that the 180 degree jump is not just a jump in itself; it is used for various other tricks including jumping on ramps and basic front to back transitions.

I’m going to teach you the easiest way to jump 180 degrees. It’s a bit complicated, but it’s easy to do. However, if you go jumping 180 degrees on your own, you will fall. I guarantee it.

The 3 Steps to doing the 180 degree Jump

The 180 degree jump is extremely easy if you’ve mastered the basic jump. I’ve divided the motion into 3 easy steps:

Again, like the basic jump, staggering the feet is the most important step to landing a clean 180 degree jump.

It helps with stability and makes the jump 10 times easier.

Bring one foot to the front and the other a bit back. Imagine making scissors with your feet.

This is extremely easy but the next part is a bit complicated.

This part may be complicated but it is the complication that makes it easy. Don’t get that? Well, read carefully.

To jump 180 degrees, you need to keep the following points in mind.

These steps will make your jump a lot smoother and easier. But, if you don’t get them, then just jump like you would normally jump. Just remember to stagger your feet.

After all, learning to jump is just a matter of trial and error.

The landing is the most satisfying part of jumping 180 degrees. It is not complicated. But, you’ll need to know how to balance yourself when skating backwards.

And that’s how, ladies and gentlemen, you land a clean 180 degrees jump on roller skates.

Here are some tips and tricks to progress gradually into being comfortable with the jump.

Practice the 180 degree jump till it becomes second nature, because you’re in for a lot of fun if you nail it.

We’re human beings so we make lots of mistakes. But to kick start your learning, here are some mistakes not to do.

The 360 degrees jump is a really advanced jump. If you’ve learnt the basic jump, and the 180 degree jump, you’re no longer a beginner, so it’s time to learn the 360 degree jump.

I won’t lie saying that this jump is easy because it’s not and many intermediate level skaters consider it to be quite a feat.

But, even though it’s scary, if you follow this guide, you will succeed no matter what.

After all, you’re determined to shock every other skater in the skate park, right?

The 4 Steps to Jumping 360 degrees

Here are the steps to jumping 360 degrees like a pro on roller skates:

Warning: Wear helmets and safety guards at all costs.

The 360 degree jump involves lots of turning around and hence you need lots of angular momentum.

This step is extremely important, otherwise, you won’t have the momentum to turn.

Here it is; the final boss to doing the legendary 360 degree jump on roller skates.

Here are some tips to get this part down.

Here are all the tips I could give to make this jump easier for you. If you clear this, you’ve pretty much gone from a beginner to pro.

I know it feels like you’re going into suicide, but, if you wear safety guards and a helmet, there won’t be a scratch on you. So don’t get scared, pack up some courage, don’t hesitate and go for it.

You know how you can land safely? Wear your helmet and safety pads. Because, you have really low chances of landing safely for the first time with this jump.

All you need is guts. Either you learn this jump or not, it’s up to you.

But don’t worry, I’m here to help you get it down. Because I understand how you dream about yourself doing the 360 degree jump and showing off at the skatepark.

So here are some tips to land a smooth jump:

Congratulations, you’re officially one of the best skaters at your local skate park. You can now officially become one of the pros.

I can feel your fear of attempting this jump through the screen, so let’s end this with some tips from a professional.

You do not want to make stupid mistakes with this jump, because that’s scary.

So don’t waste your time making these common mistakes that people often make.

If you follow all this advice word by word, you’ll nail the 360 degrees in just a few attempts. The only hurdle between you and this jump is your fear which you’ll need to overcome by yourself.

After learning these jumps, it’s time to spice things up a bit.

After all, you do want to get out there and learn as many things as possible to make your roller skating journey as interesting and fun as possible:

Here’s a few things you can check out to enhance your roller skating experience even further:

If you want more tips and tricks to get better at skating as fast as possible, then check out our skating guides.

Zeera Author
Hi, I’m Zeera. I absolutely love skating. I mainly do rollerblading but also have lots of knowledge in skateboarding and ice skating. I’ve tried to write as much as possible on this topic. Feel free to drop a message if you have any questions. Hope you enjoy our blog. I challenge you to roll with me ;) 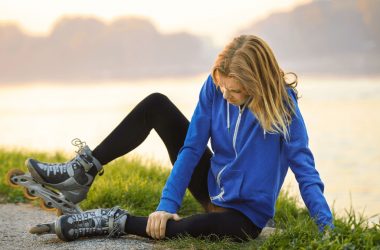 Unlike in many aspects of your life, there is a 100% guarantee that you will get hurt while…
Read More 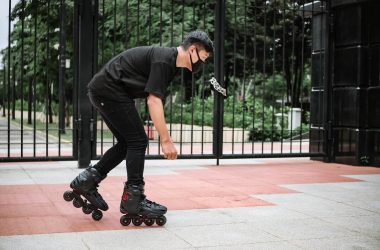 Can I roller skate with scoliosis? That’s a good question indeed. The answer is somewhat, yes and no.…
Read More 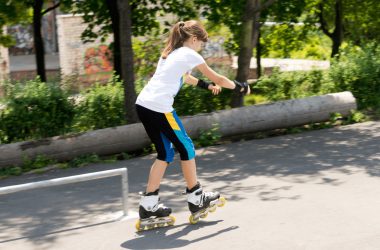 What muscles do roller skates work?

When I first started roller skating, I did so for the sheer fun of it – I loved…
Read More